The charm of a vintage car gathers in itself a series of feelings and sensations which can only be understood by the people loving motors and mechanics. The word "vintage car" has got its peculiar meaning in most people's imaginary, for example if we think about the Fiat 500 or to the "Topolino", or again about the eldest Isotta Fraschini. Nevertheless, the motor lovers give another significance to a vintage car which maybe has been the most beautiful surprise between the sixties and the seventies in our "bel paese", which producer was firmly convinced he wouldn't create more than 100 exemplaries of it. We are talking about the Lamborghini Miura. 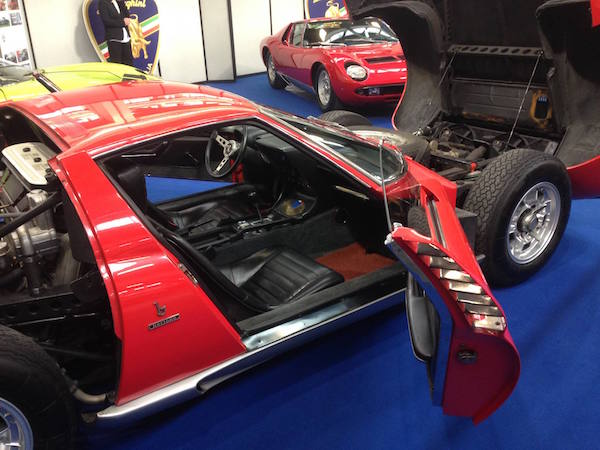 Lamborghini Miura: An innovative frame which was ready to write the story of the grand touring cars!

It was 1965 and in Turin at the motor show, Lamborghini displayed a frame model with a steel structure and metal boxed, with a lot of bores in order to lighten its weight. In short, it owned all features of a sports car of that times and this is underlined right for the well known Lamborghini's dislike for the world of the car races. The creators of this prototype, which is still considered by everybody as a technology and mechanics' jewel, were GianPaolo Dallara (already popular for the car frame construction of the Veyron) and Paolo Stanzani. Technically, for the detail lovers, the structure was built to accommodate cylinders with a 3,0 liters capacity  in a transversal central and rear position. This was another mechanical innovation which was very successful for that times. That car frame was signed PT400.

Lamborghini Miura: A race car, adapted for the road!

At that time, the majority of the grand touring cars were equipped with a front motor with a rear traction. The PT400 frame innovation pushed Bertone to an indecent proposal: in fact the legend narrates that Nuccio Bertone, deeply fascinated by the frame told Mr. Lamborghini "I'm the one who can make shoes for your feet". After this proposal and after the enormous success at the motor show, Lamborghini convinced himself and his words were still once the project was approved: "It will be a good advertising, even if we won't sell more than 50". Obviously, he had to change his mind very soon ! 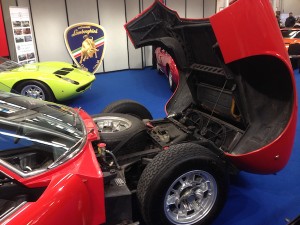 Another peculiarity bound to the birth of this mechanics' and frame fairytale, was the reason which pushed Lamborghini to give to Bertone the Miura's bodywork creation. The choice  fell on a Turin company for a simple reason: competition. Mr. Bertone in fact had no relationships with the direct Lamborghini's, Ferrari's and Maserati's  competitors. Above all, it was an external company which was specialised in the creation of wonderful car frames. All the rest, as we can say for a legend with the big "L", is written in the history. In 4 months only, Mr Marcello Gandini, Bertone's head designer ( and just called to substitute one "named" Giorgetto Giugiaro...) created the car line by eliminating the letter T from the initials. The name Miura instead, was selected for the influence that tauruses had on Ferruccio Lamborghini who, born under the taurus sign, wanted to name this car Miura, in honour of the breeder of fighting tauruses whose name was Don Eduardo Miura Fernandez.

Geneva's 1966 motor show and the birth of a legend!

The Miura P400 was officially shown for the first time at Geneva's motor show in 1966 and it literally left all visitors breathless. From that moment on, the sports car sector was no more the same as before and it was deeply influenced by the young and go-getting Lamborghini car. 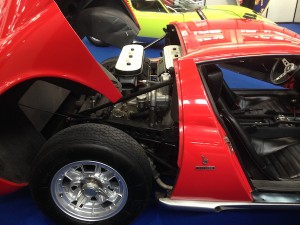 The Miura P400 production was slightly different in the mechanics from Geneva's presentation. The magnesium alloy wheels by Campagnolo in fact, replaced the spoked ones, which were shown as a prototype in the swiss city; the rotative gear direction was inverted, because it generated vibrations and a plate clutch extreme to the crankshaft replaced the triple disc clutch. A permanent shutter was positioned on the engine to advantage the heat dispersion. The Miura's distinctive features in the end were the unusual eyelashes around the headlights, the total frame height with a "big" 110 cm, with both front and rear hood in aluminium. The interiors had the innovative position of the different controls on the roof, behind the rear-view mirror.

As far as the engine power is concerned, Lamborghini declared for Miura a power of 260 kW (350 hp).

The market launch of this innovative sports car was so overwhelming, that in the sole 1967 Lamborghini consigned 108 exemplaries thereof, when just 20 had been foreseen during the creation of the assembly line....a great result indeed! The Miura p400  production ended after two years and a half, with a total production of 275 exemplaires.

Who owned a Miura in those times, couldn't avoid to feel like a road master. With a maximum speed of 280 km/h there were only a few which were able to restrain their will to put pedal to the metal.

In 1971 Lamborghini presented the Miura in its final version, the most perfect, the best, the fastest and still today the most valued and wanted: Miura P 400 SV (where SV is for Super Fast in italian initials ). This new wild version eliminated the "eyebrows" around the lights, the rear mudguards were enlarged in order to accommodate larger tires (235/15/60) and the motor could reach a 385 horse power which was able to generate a maximum speed of 295 km/h....and don't forget we are talking about 1971.

Today the Lamborghini Miura belongs to the olympus of all those cars which made the style-,mechanics- and aerodynamics history of the automotive sector.

During its production years it made not only a lot of passionate and common people happiness, but it became a real design and speed symbol; Not by chance, a lot of famous people and politicians like es. Claudio Villa and Gino Paoli in Italy , Dean Martin, Elton John abroad, King Hussein in Jordan or Mohammed Reza Pahlavi abroad, made it their own car; officially, the Lamborghini Miura was put out of production at the end of 1972, but still today it continues to be among the most required (vintage) sports car, so much to reach the amazing amount of 1.705.500 dollars (about 1,2 millions Euro). 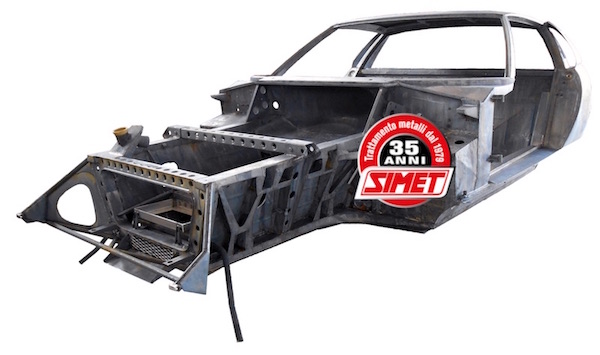